It is very difficult to know the truth in our post truth era. Intellectuals, elites and the well-educated are criticizing every idea the Trump administration brings forward.

He was hampered in moving forward in Repairing the Healthcare System when his own Republican Party did not pass the house of representatives’ bill to repeal Obamacare. The repeal would have enabled his administration to move the repair of the healthcare system forward quickly.

Most of President Trump’s ideas when it has related to repairing the healthcare system have been common sense. They are steps in the right direction.

The industry will do everything in its power to spin the story so that the Trump administration’s plans sound sinister to the American public.

The American public can only make decisions on the information presented. In the post-true era the public does not know what to believe. The media has been anti-Trump and is not interested in presenting the details of President Trump’s blueprint for lowering drug prices utilizing free market principles.

“The problem of high prescription drug costs is something that’s been talked about in Washington for a long time. But that’s all it’s been: talk, talk, talk.

We are privileged to have a president finally acting, by laying out a blueprint for solving these problems using private-sector competition and private sector negotiation.

We’re not going to propose cheap political gimmicks. The President’s blueprint is a sophisticated approach to reforming and improving our system.

Everyone at HHS is rolling up their sleeves to get to work on this.”

On October 28,2018 the WSJ editorial board wrote a negative view of the Trump administration’s plan to lower drug prices. It is almost as if the editorial board did not read President Trump’s proposal as it appears on the White House web site.

I believe it is worth discussing President Trump’s blueprint for lower drug prices.

I will then present the main points in the Wall Street Journal editorial.

The blueprint starts by stating:

These are the main problems with drug prices in the U.S.

Drug costs consume 30% of the healthcare dollar. Drug costs are unaffordable to both consumers and the government. Over 40% of elderly patients consume greater than nine drugs daily. Fifty percent of those 40% experience adverse drug reactions due to drug interaction. Many end up being hospitalized thereby increasing the cost of medical care.

If a patient cannot afford to buy a drug because of its cost it will not help control their disease. A hospitalization will occur increasing the cost of healthcare.

“One of my greatest priorities is to reduce the price of prescription drugs. Prices will come down.”

The public should take this comment at face value.

These are some of the facts;

Isn’t that crazy? The government negotiates drug prices for the VA and Military but not for seniors. The government pays less than half for drugs in the VA healthcare system than seniors do for Medicare Part B and Part D.

The 340B program was enacted in 1992 by congress.  Section 340B requires pharmaceutical manufacturers to enter into an agreement, called a pharmaceutical pricing agreement (PPA), with the HHS Secretary.

Under the PPA, the manufacturer agrees to provide front-end discounts on covered outpatient drugs purchased by specified providers, called “covered entities,” that serve the nation’s most vulnerable patient populations. Medicaid patients get drugs free. The government pays the pharmaceutical companies the money through a series of middlemen.

The HHS executive summary outlines not only the problem it outlines the Trump administration’s solution. President Trump’s HHS team which includes CMS has spent many years studying the abuses that have led to dysfunction of the healthcare system. I believe HHS figured out the solution.

HHS has identified four challenges in the American drug market:

Under President Trump, HHS has proposed a comprehensive blueprint for addressing these challenges, identifying four key strategies for reform:

There is nothing sinister about these goals. Some will work. Direct negotiation with drug companies certainly will work. The middlemen get more money per capsule than the drug company that invented and manufactured the drug. The middlemen, who are marketers, are terrified that President Trump is going to destroy their business.

1) actions the President may direct HHS to take immediately.

2) actions HHS is actively considering, on which feedback is being solicited. 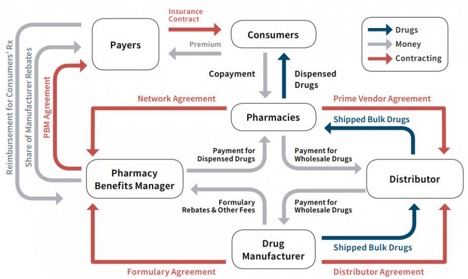 The president and his administration are not a heartless group of politicians who don’t care about cancer drug cost. They are interested in patients receiving the best care at an affordable price. They care about fair pricing. Their goal is to eliminate the mechanisms by which multiple stakeholders game the system. This includes the multiple middlemen and the tremendous bureaucratic load.

Phase one of the blueprint:

The administration is aware of foreign free riding. They have not published a definite free market solution to change the situation yet.

This is a stupid idea. It might save money but it tries to direct care and eliminate physician judgement. Healthcare providers will figure out how to game the system.

It is about time this is happening. Hospitals are buying more and more physicians’ practices. Hospital systems bill the government hospital reimbursement prices. These prices are twice the government and private insurance companies approved office prices.

Hospital systems will fight this change tooth and nail. President Trump has the courage to go at it. Almost everyone in medicine has known about these unfair payments. However, past U.S. presidents have been afraid of the blowback from the powerful hospital lobby.

President Obama knew that this would drive physicians into selling their practices to hospital systems. The result is obvious. It would be easier to institute a single party payer system.

“The anti-kickback statute has been in place since 1971, but these specific safe harbors, protecting drug companies from anti-kickback laws, were introduced more than 2 decades ago.

The federal government provides an excellent resource for information about these safe harbors at the Federal Register website. It tells everything one needs to know about the opportunities for fraud and abuse in the current system. The website describes how the Trump administration plans to eliminate the government support of fraud and abuse.

In brief, the safe harbors define exceptions to situations where organizations are receiving “remuneration” for providing goods or services.

A rebate given as an incentive to provide a drug (i.e., on formulary) or to utilize more of a product (i.e., “performance rebates”) would currently qualify for safe harbor protection.”

I will discuss this in more detail in the future. This is another act of courage by the Trump administration. It is also a common sense move to reduce the cost of healthcare in our dysfunctional healthcare system.

The high retail pricing of new drugs on the market must be control. Many of the new drugs are a reformulation of two old drugs. The reformulation does not change the effectiveness of either drug.

The retail price of drugs used to treat cancer must be controlled someway.

Finally, we have an administration that not only recognizes the problems but is not afraid to fix them.

The Mainstream media refuses to acknowledge the advantage of the Presidential order to allow Associations to participate in available health insurance plans.

Democrats do not want the public to understand the advantages President Trump’s healthcare insurance associations will provide to consumers. It is an important step in Repairing the Healthcare System. Obamacare was advertised only to fix the individual insurance market.

The mainstream media has forgotten that Obamacare was originally sold by President Obama to cover the individual insurance market. The individual healthcare insurance market was unaffordable. Obamacare was supposed to make it affordable. It turns out that 85% of Obamacare recipients are subsidized by the federal government. President Obama has expanded socialized medicine and a single party payer (the government) with Obamacare. Even with government subsidies the insurance is unaffordable because of the high deductibles.

It is difficult for me to understand how President Obama says he always tells the truth. He said he was going to make the healthcare individual market more affordable. He has not.

Now, the Democrats want the government to run the entire healthcare delivery system with “Medicare for All.” The unsustainability of “Medicare for All” is estimated at 32 TRILLION dollars over the next ten years!

The pundits in the mainstream media seem to have no interest in understanding this dynamic. Their only interest is to despise President Trump and regurgitate the Democrats’ easy to understand talking points.

Mr. Acosta said “As the cost of insurance for small businesses has been increasing, the percentage of small business offering health coverage has been dropping substantially,”. “This expansion will offer millions of Americans more affordable health care options.”

The U.S. Chamber of Commerce said the change, “will give employers the relief and flexibility they need to cover more employees at a lower cost with more choices for quality care.”

The Congressional Budget Office estimates that 4 million people, including 400,000 who otherwise would go without insurance, are expected to join association health care plans by 2023.

The introduction of associations is going to disrupt the Democrats plans to take total control of the delivery of healthcare. It is going to start to put healthcare delivery back in the hands of the consumer!

“You’re going to save a fortune,”

I believe he is closer to being right than he is being wrong.